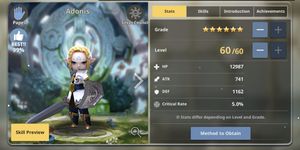 General of the "Holy Guardians" under the Council. When the Elven society was split with the war between the Elves and Dark Elves, Adonis was able to unite the Elves to protect the sanctuary and drive off the Dark Elves. However, Adonis learned later the divide happened because the previous general, Alcaude, discriminated against the Dark Elves, and so Adonis exiled Alcaude from Silvas. Adonis foresaw a reality where the Elves could no longer coexist with the Dark Elves due to war and fought against the Dark Elves in order to protect the sanctuary. Adonis believes that protecting Elven Society and protecting the World Tree are his life's missions, and pledges to hate everything that could cause harm to Silvas.